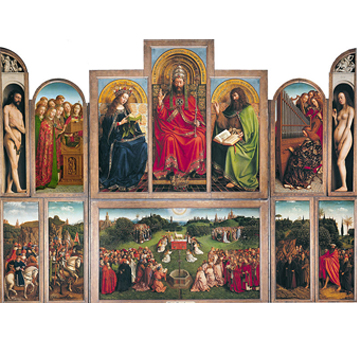 On Good Friday we walk with Christ on His sorrowful way to Calvary, where our redemption was bought at the price of the Blood of the sacrificial Lamb. If the power of sin creates distortions in the very fabric of nature and of human society, Calvary represents the definitive undoing of that knot of evil in our world. And the Virgin Mary, who was silent during the time before Passover, was found standing at the foot of the Cross with Christ, united with Him in the work of undoing the power of Satan.

A Perceptive Vision
A little-known Spanish mystic of the 15th Century, Venerable María of Ágreda, once described a powerful vision she was given about the Crucifixion. As the story goes, the devil became aware of the true identity of the Savior after Judas had betrayed Him in the Garden of Gethsemane. The devil finally understood something that he had been blind to for so long – that Jesus’ sacrificial death on the Cross would be the complete undoing of the kingdom of evil. According to the mystic, as Jesus walked the Via Crucis toward Calvary, the devil went rushing about, attempting to stop all the evil things that men were doing to Jesus and tri to prevent Him from dying on the Cross!
This mystical view of the event is not doctrinal, of course, but it is theologically coherent. St. Paul claims that God led the devil into a trap and used Satan’s own evil against him for the purpose of our salvation. Paul makes reference to the victory of the Cross as the triumphal procession of Christ “making a spectacle” of the devil and leading him off disarmed, demoralized, and captive (Col 2:15). The very chains of sin that were taken off humanity that day were used to bind the devil himself!

Standing at Calvary
The primary witness to this Great Undoing was not Peter, the designated head of the Church. The prince of apostles had cowered before the power of evil and was nowhere to be found that day. Standing at the foot of the Cross, however, was Mary, the Mother of Jesus, whose union with His suffering brought her into an intimate relationship with the power of grace. In fact, her participation in the act of redemption was so complete that the Church has always seen her as the channel of all the graces that flow from the Cross of Christ. Her authority and power as the “Undoer of Knots” is rooted in her presence at Calvary, suffering with Christ for the redemption of the world.
As Good Friday passes into Holy Saturday we look forward to seeing the victory of grace in the Resurrection. Our hearts will burst forth with the triumphant “Exsultet” hymn of Easter joy, and our lives will be filled with holy light. Let us never fail to remember, however, that the price of that joy was the shedding of the Blood of God’s only Son. He was also the Son of Mary, who offered Her only child as a sacrifice for the sins of humanity.

Undoing Sin
Even though the war against evil has been definitively won by Christ, humanity’s particular battles against sin rage until the end of time. The devil continues to “prowl about the world seeking the ruin of souls,” as the St. Michael Prayer states.
Mary, because of special privilege, undoes the power of sin in our lives every time we turn to ask her intercession. Some sins are purified through penance, where Our Lady, Mother of the Church, assists us in staying close to the sources of grace offered by the sacraments. Often sins are purified through the reality of human suffering, and the Virgin Mary, who stood with Christ at Calvary, stands with us in all our sufferings, undoing the power of sin in our lives and leading us to holiness.
Above all, we must have the greatest confidence to bring all our prayers and concerns to our dear mother every day. There is no concern too great or small for a Mother who suffers with her children. After that fateful day on the hill of Calvary, where she witnessed the total destruction of the devil’s power, Our Lady is standing in the perfect place to intercede for us at the source of all grace.