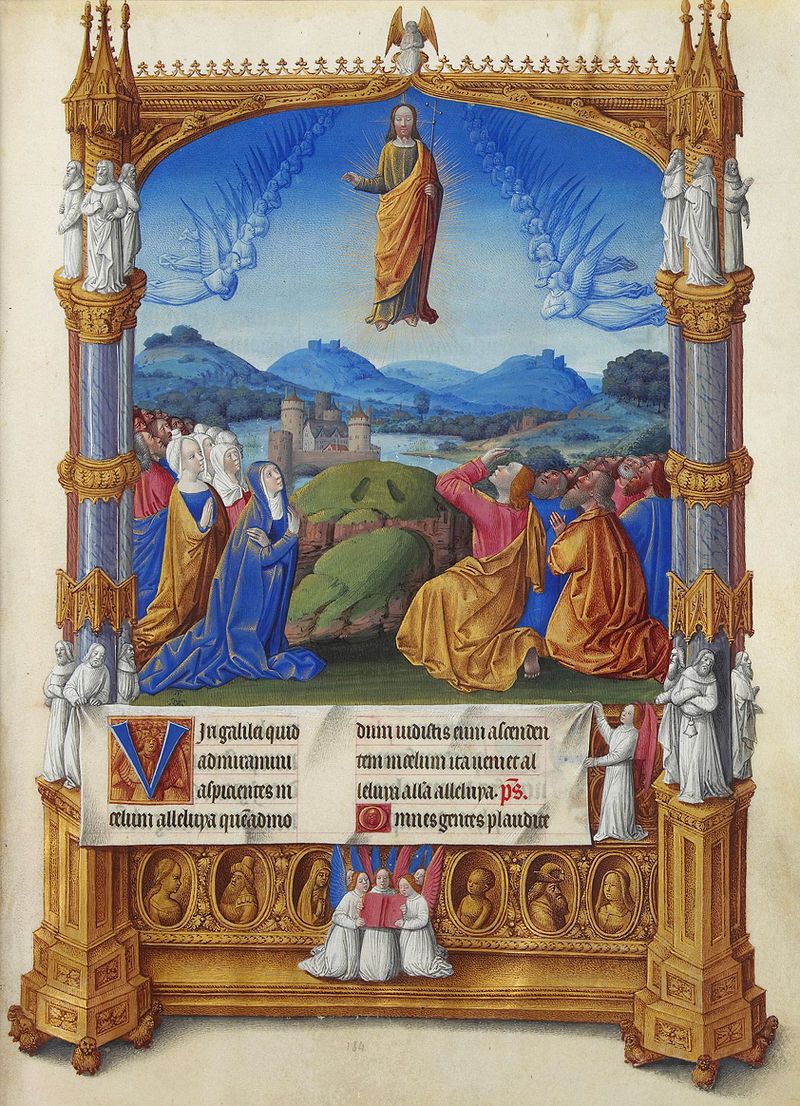 We do not usually associate the blessed Mother with her Son’s Ascension. However, it is a good idea to contemplate this mystery through her eyes, as we do in the rosary.

The Ascension
In his homily on the Ascension in 2009, Pope Benedict XVI explained that the Ascension was not a voyage on high; instead, it was a mighty action by God who let Jesus enter into the space of divine closeness by making him go through a cloud, thus allowing him disappear in front of everybody’s eyes. This is what we see happening in Giotto’s fresco in Assisi. Thus:
“To present the Lord wrapped in clouds calls to mind once and for all the same mystery expressed in the symbolism of the phrase, ‘seated at the right hand of God’. In Christ ascended into Heaven, the human being has entered into intimacy with God in a new and unheard-of way; man henceforth finds room in God for ever. ‘Heaven’: this word Heaven does not indicate a place above the stars but something far more daring and sublime: it indicates Christ himself, the divine Person who welcomes humanity fully and forever, the One in whom God and man are inseparably united forever. Man’s being in God, this is Heaven.”

The Blessed Mother’s growing faith
John Paul II had emphasized the fact that Mary’s faith did not stop growing in her daily life, even when her Son died and she underwent a “night of the soul”.
The mystery of the Ascension also inscribed itself in this journey. Her Son’s disappearance led to Mary living her relationships with Him and others differently.

The Blessed Virgin Mary as Mother of Human Beings and of the Church
The Ascension of Christ allowed the blessed Mother to play her part as Mother of the Church. The apostles, as Pope Benedict XVI explained, were still under shock from the death and resurrection of Jesus, and were anguished about having to remain alone after Christ’s Ascension into Heaven. The Blessed Mother who “believed that what was spoken to [her] by the Lord would be fulfilled” (Lk 1, 45) taught perseverance in the faith (see Benedict XVI’s speech of May, 26 2006).
Hence, she played an important part in helping the apostles to live through this new phase and to wait patiently for the coming of the Holy Spirit. He would embolden the Apostles, become perceptible through their witness, preaching and missionary efforts.

May the blessed Mother help us to grow in faith and strengthen in us the desire for Heaven, which is also the fruit of the second glorious mystery. Pope Benedict XVI reminds us: “And we draw close to Heaven, indeed, we enter Heaven to the extent that we draw close to Jesus and enter into communion with him.” May Mary, Undoer of knots, untangle those knots that hinder this communion.