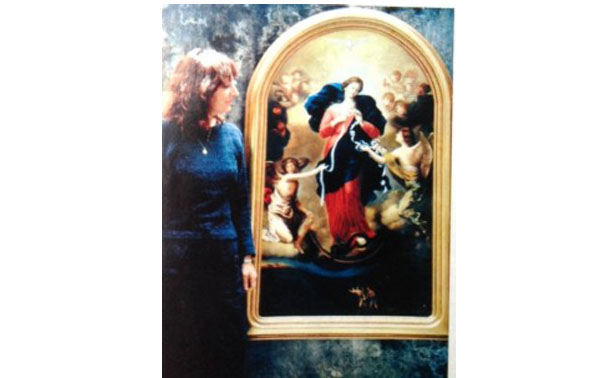 The love of Pope Francis for the blessed Virgin often expresses itself by his devotion for the painting of Mary, Undoer of knots
. A copy of it hangs in the chapel of Domus Sanctae Marthae, where the holy Father resides. This painting was made by the Argentinian artist, Ana Maria Betta de Berti.

The origin of the Pope’s devotion for Mary Undoer of Knots
Many people know that Pope Francis is very attached to the image of Our Lady Undoer of Knots. The original painting goes back to the 18th century and hangs in Augsburg, Germany in the church of Sankt Peter am Perlach. Nonetheless, the most common version about the origin of his devotion is partially erroneous.
“I never went to Augsburg”, as the Holy Father revealed in an interview with the German newspaper, Die Zeit. He thereby contradicts the story that the young Father Jorge Maria Bergoglio had gone to visit Augsburg in the 80ies while he was studying for his doctorate in Frankfurt. Pope Francis explained that he had learned about the image of Mary Undoer of Knots from a religious sister when he was a priest. She sent him a Christmas card with this image of the Virgin. He was so fascinated by this unique representation of Our Lady that he sought more information about it and became an important promoter of this devotion.

The image of the Argentinian artist
The artist, Ana Maria Betta de Berti, a friend of the Pope since the time that he was bishop of Buenos Aires, decided to paint a copy of Mary Undoer of Knots for the parish of San José del Talar. In fact, it was the second copy she had made. The first had been for the chapel of the University of the Savior in Buenos Aires (she was working at that university). After that, she made three more copies: one for the residential chapel of the governor in the province of Buenos Aires’s. The second was for the rectorate of the Libera Università Maria Santissima (Lumsa) in Rome and the last for the chapel of the Domus Sanctae Marthae where Pope Francis lives.

The spreading of the devotion across the whole world
In an interview, Ana Maria Betta de Berti interpreted the importance of this painting within the life of the future pope: “In this art-work, one sees Mary who works for us by untying knots which is a reference to the problems in our lives. This image had certainly touched the soul of Bergoglio who wanted to make it known in his country without realizing that it would spread from Buenos Aires to the whole world.” It was prophetic for during the Conclave of 2013, a seagull had landed on the chimney of the Sistine Chapel, just before the white smoke announced the election of Jorge Mario Bergoglio to the papal throne. “When we saw this silvery seagull, we understood that the Holy Spirit had blessed our country. Buenos Aires is on the border of the Rio de la Plata, the river of silver. This sea-gull was not there accidentally.”