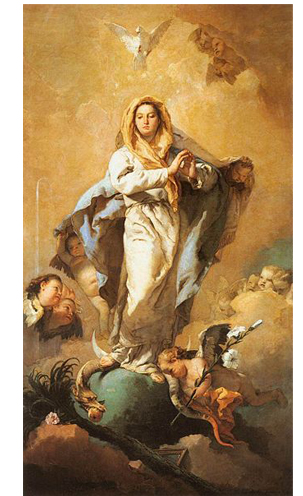 Ask who the most significant figure of the 20th century was, and you will most certainly get a variety of answers. Depending on whether the respondent focuses on the worst (Hitler, Stalin, Mao) or the best (St. Mother Teresa, St. John Paul II) or those who politically had the most positive influence on the course of world history (Churchill, de Gaulle, Reagan, depending on the worldview), one will hear different names. However momentous the acts of these figures were who shaped the lives of millions for better or for worse, they pale against the person who was absolutely key to this century – the Immaculate Conception. While only a few words of hers are recorded in the New Testament, her voice has been heard throughout the past century to an extent that had never been the case before; and her interventions speak even louder.

Already in 1917, she had appeared to three children in Fatima, Portugal, warning the world of the errors Russia would spread, and announced World War II if people did not convert. A week before the apparitions started in May 1917, Pope Benedict XV had asked Mary to intervene in order to bring about peace in the world as World War I continued to rage. The solution she offered was praying the rosary, making penance for sinners and a conversion of heart. Jesus, she said, wanted a world-wide devotion to her Immaculate Heart and her heart, of course, is at the core of who the Immaculate Conception is.

Her request in 1929 for the Holy Father to consecrate Russia to the Immaculate Heart of Mary in union with all the bishops of the world so that the Soviet Union would be converted and for there to be peace in the world (as already announced on July 13, 1917), was only partially fulfilled by Pope Pius XII, until Pope John Paul II did the consecration in 1984 (accepted by God, as Lucia confirmed). The way Communism fell only five years later like a house of cards with hardly any bloodshed, when violence and massive retaliation were to be expected, can only be explained by divine intervention.

We might have had 100 years of peace, if more people had responded to her call in Fatima and since then in various apparitions. Communism would not be making its comeback in the raging culture-wars. The knots of sins tied and the lasting wounds inflicted during the 20th century would be that much easier to undo – though nothing is impossible to God and His Mother.
But why has God granted such power to her? Through the grace of the redemption working backwards, she was exempted from original sin. She carried no wounds, had no doubts in the infinite Love of God as we have done since the Fall, and was therefore perfectly receptive to Him. Hence the angel Gabriel rightly called her “full of grace”. Her heart was absolutely pure and transformed ever more deeply through love. This did not come on its own, but required her continued free choice; for unlike Eve, she was living in a world filled with pain and sin, where rebellion and temptation came much more easily than in the pleasant garden of Eden. Even under the Cross, when her only son, God Himself, was being cruelly executed, she did not falter in her “yes” to God. This was the supreme moment of both their hearts becoming one.

Her humble response to God, seeing herself as simple handmaiden of His will, gives her an authority that makes the demons tremble in Hell. The devil can do nothing against she who is immune to pride; she can therefore crush him under her heel. It makes sense therefore, that she would bring down the modern manifestations of the devil’s power that are totalitarian regimes – whether those of the past or those of the future.

Let us therefore pray to the Immaculate Conception during her feast-day on December 8th and the celebration of her conception on December 9th. For she has been given the power to untie the knots of our sins that are sometimes so tightly interwoven that they turn whole countries into a living hell; she can soften those whose hearts of stone that have become impervious to God and the most defenseless. Our Lady, we consecrate our lives and the 21st century to your Immaculate Heart.