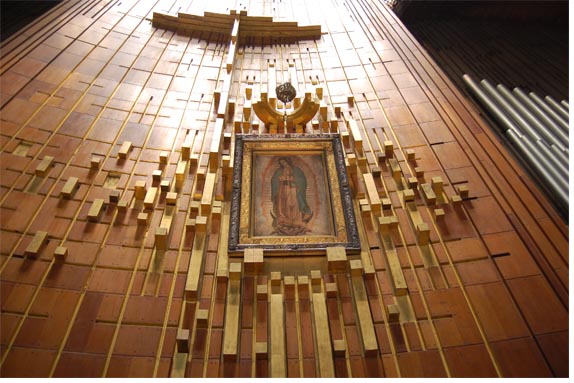 In 1531 the Virgin Mary appeared a number of times to a simple Indian at the center of the New World and evangelized a continent. Her maternal love overcame the deep cultural divisions of two hostile nations that could not find reconciliation through their own efforts.

The first bishop of the New World, Franciscan Juan Zumárraga, arrived at the port of Vera Cruz, Mexico in 1528 to find that the world he desired to serve was on fire. This social and moral fire raging through the land was so immense that he knew he needed some power greater than his own abilities to turn the destructive fire into a blaze of grace. Holy man that he was, he walked two hundred miles from Vera Cruz to Mexico City barefoot as a penitential means of inaugurating his episcopal ministry to souls.

The Conflict
There was good reason for the raging fire. The Spanish had vanquished the kingdom of the Aztecs seven years earlier, but the conquest became an opportunity for some Spaniards to engage in greedy exploitation, and even slave trafficking. In fact, Bishop Zumárraga was sent to Mexico by the Spanish Crown with the title of “Protector of the Indians” precisely to end these abuses. However, the corruption of government officials in Mexico was so deep that the bishop often had to smuggle his official correspondence to the Royal Court in cargo ships so his dispatches would not be confiscated. The scandal caused by the so-called Christians defeated the efforts of the Catholic missionaries to evangelize the indigenous population, and Bishop Zumárraga despaired of any human solution to the tangled situation.

Our Lady
The holy bishop turned to the surest source of comfort and help that he knew: the Blessed Virgin Mary. Zumárraga feared an insurrection among the Indians and immediately began praying for a miracle to avert the bloodshed. Well, he got one. In December of 1531, Our Lady appeared five times to a humble Indian, Juan Diego, telling him to ask the bishop to build a church where she could show all her “love, compassion, and help“ to the people of that land. She left a clear sign of her presence: a portrait of herself imprinted on the Indian’s mantle, which can be seen to this day in her church in Mexico City. We must leave the details of the delightful story of the apparitions to historians so we can focus on Our Lady’s inexhaustible charism of untying the knots of deep cultural divisions. Consider the following historical facts:

Human Sacrifice
Prior to the coming of Our Lady of Guadalupe, the Aztecs practiced human sacrifice. Recent archeological findings in Mexico City confirm the horror of the mass executions tied to the Aztec religious system. The conquest put an end to the public cult but also drove that terrible practice underground, which led to a greater preference for child sacrifice because it was easier to hide.
Prior to the apparitions, the vast majority of the Indian population rejected the Christian Faith preached by the missionaries. It was the religion of their conquerors and alien to them in language, culture, and worldview. It required them to give up cherished practices like polygamy and demon worship. In essence, these and other deep-seated cultural differences made it virtually impossible for there to be peace between the Spanish conquerors and the subjugated population.
But the Blessed Virgin of Guadalupe untied all of those knots in one dramatic event of grace. For example, there is no historical record of the practice of human sacrifice after she appeared. Her tender love for the people, whom she called Her children, transformed a bloodthirsty culture into one that began to respect basic human dignity.

Conversion
Furthermore, contemporary accounts estimate that in the decade following the apparitions, nine million indigenous people accepted Baptism – nearly two-thirds of the entire population! – and gave up their idolatrous and immoral practices. It was as though a flood of baptismal water had washed away the scarlet sins of a whole nation.
The Virgin spoke in the indigenous language to appeal to the Indians, but she also called herself by the name of Guadalupe (a Marian shrine in northern Spain) to bring the Spaniards too into the great mystery of reconciliation. Because of her maternal embrace of both cultures, no bloodshed occurred, and the two hostile cultures eventually merged to form what we now know as the Mexican nation.

We may ask ourselves why Our Lady does not eliminate such evils as abortion or human trafficking in our own day or heal the many divisions of modern society that cause so much suffering. The answer may lie, not with Our Lady, but with the first bishop of the New World. Perhaps we too need to walk barefoot to our destiny begging Our Lady Mary who unties knots to come and reconcile us to each other.