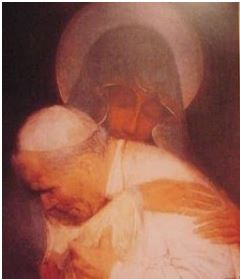 There are turning-points in history: surprising, mind-boggling, life-changing. Humanly speaking, things should have gone a certain way, but then take an alternate route. They are too complex to be attributable to chance alone. For those having eyes to see and ears to hear, they are God’s manifest way of speaking to human beings.

Already in the Old Testament, Pharaoh should have realized after a few plagues that it was not worthwhile standing up against the God of the Israelites. But not only did he wait until his own son was struck down, he sent his men after the Jewish people once they had left, only to see them swallowed up by the red sea. And this kind of behavior continues to the present day. God’s warnings often go unheeded, but if we mind them even in a middling way, He remains true to His promise.

The Interventions of the Blessed Mother
In 1917 Our Lady of Fatima warned that a second world war would happen if people didn’t convert. It did, but she also gave us the tools to bring down Communism. When the USSR imploded a few years after John Paul II’s consecration of the world and Russia to the Immaculate Heart of Mary, everybody was stunned. Reasons were found afterwards, i.e. the belief in enlightenment principles had been justified, the economy had been crumbling after all, once such a regime stops expanding it disintegrates etc. But does this really explain how the regime collapsed with hardly any bloodshed?

There are many more examples of this: how the Christians defeated the Muslims against all odds at the battle of Lepanto in 1571; the way the Russians retreated of their own accord from Austria in 1955 after a seven-year rosary campaign joined by 10% of the Austrian population; the blast in Nedelin on October 24, 1960 killing many scientists which was a serious setback in Russia’s armament program, to mention just a few. During the last millennium, the blessed Mother has been the one, it seems, sent by God to change human history for the better, to save humanity from its wickedness and from the destruction this entails. She who hardly speaks in the Gospels and remains silent after having told the servants (and us) at the wedding of Cana to do all that her son would ask them, has been talking to us and is given the role of taking world-political action. After all, she is the Queen of Heaven and Earth.

Polish History in the 15th and 17th century
Her special love for the Polish people has been shown in her active involvement in its history multiple times. In the monastery of Jasna Gora in Czestochowa an icon of the black Madonna, which was supposedly painted by St. Luke, has been honored since the 14th century. During a Hussite invasion in 1430, the icon was stolen and put on a cart, but the horses refused to budge. One of the plunderers then threw it on the ground, inflicting two big strikes on it with his sword; when he tried to do so a third time, he collapsed, writhing in agony, and died. Attempts to paint over the icon’s scars turned out to be impossible.

Then in 1655, Mary talked with the Protestant leader of the Swedes, General Miller. King Charles X Gustav of Sweden had occupied almost all of Poland. Nothing, it seemed, could stop the Swedes from conquering the town of Czestochowa. The siege was intense and prolonged. But then a lady came into General Miller’s room and spoke with such insistent authority that he felt he couldn’t disobey her. She was also seen by the Swedish troops during the night, walking around in her blue mantle, pointing the canons and her “sight made [them] drop with terror” according to an eye-witness account. After forty days of fighting, with a mere seventy monks and one-hundred-eighty volunteers standing up against the 4,000 Swedish soldiers, the enemy retreated. Afterwards General Miller wanted to see the icon. When he looked at it, according to the witness of the Dominican sisters there, he said: “It is absolutely not comparable to that virgin who appeared to me; for it is not possible to see anything comparable on earth. Something of the celestial and divine, which frightened me from the beginning, shone in her face.” Clearly, he thought that the lady who had spoken with him was the blessed Mother. Once Poland had been freed, King Casimir II proclaimed Our Lady of Czestochowa the Mother and Queen of Poland during a celebration at the Cathedral of Lviv.

Polish History in the 20th Century
But it is in the 20th century, that the blessed Mother has appeared, said and done the most. And it would turn out that the small country of Poland, that suffered so much, would be key to God’s plans. On September 15th, 1920, when the Soviet Red Army was preparing for an attack on Warsaw on the banks of the Vistula river, the Virgin appeared in the clouds above Warsaw. The Red Army was soon defeated in a series of battles. Though Poland would be occupied nineteen years later by the Germans and Russians, and controlled by the USSR after the war, this did not stop God’s plan. Saint Faustina’s message of Christ’s infinite mercy started spreading while Karol Wojtyla began on a path to sanctity which would lead to the overthrow of Communism during his pontificate. And St. Maximilian Kolbe’s martyrdom in Auschwitz would give many graces to the world.

The story is not over. The battle continues. Communism is rising again in the West like one of the heads of the beast mentioned in the Apocalypse that was fatally wounded, yet healed. But Mary’s Immaculate Heart will win, as she announced in Fatima. The power of prayer is immense, much greater than all the armies of the world. It keeps the world going. According to the Talmud, all it takes are thirty-six just men to prevent the world from coming to an end (perhaps a reference to the dialogue between Abraham and God about the destruction of Sodom).

Let us pray to Mary, Undoer of knots, and ask her to untie the medley of confusion, rebellion, atheism and culture of death that are too knotty and immense for us to undo. For nothing is an impossible task for the Queen of Heaven and Earth, who is “terrible as an army set in battle array” (Cant. 6:10).