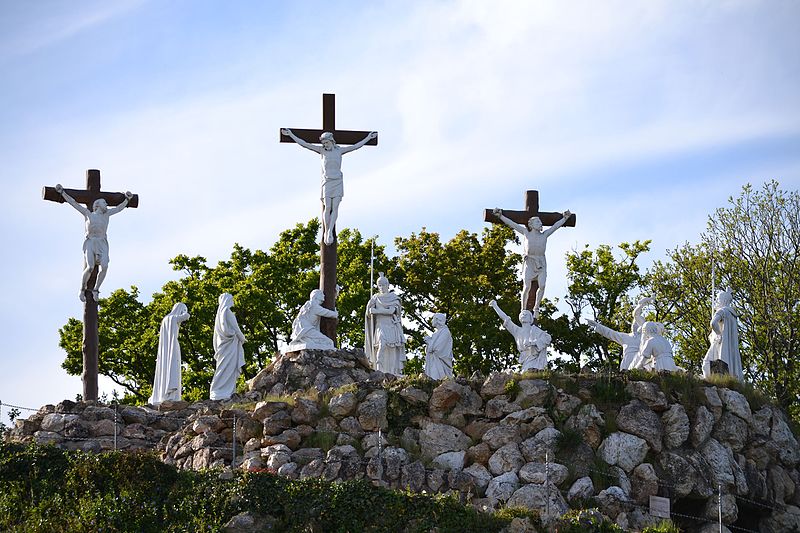 Every saint in God’s garden has his own beauty. St. Therese of Lisieux compared herself to a common daisy though her faith would become like a mustard tree of which Christ speaks in the gospel in which many birds will find shelter though it starts off as the smallest seed. Some saints are outstanding in a different way; like splendid orchids, people cannot help but notice them. They are original and radical in a manner that is often upsetting, but world-changing. I’m thinking here of St. Francis of Assisi, St. Philip Neri and St. Grignion who were all fools for God in their own ways, while being dedicated knights of the blessed Mother.

By definition all saints go against the mainstream, even when living within a Christian society, but some seem to stand out particularly, rubbing people the wrong way. St. Louis Marie was perhaps the most persecuted successful preacher in the history of the Church. His life seems a series of successes and disasters which he took mostly in stride though even he reached his breaking-point.

His Beginnings
Born in Montfort-sur-Meu in Brittany, France, on January 31st, 1673 as the eldest of 18 living children to a choleric father who was a notary and a gentle, very pious mother, he was sent to the Jesuit College in Rennes at the age of 11 and continued with theology and philosophy after completing his secondary studies. Being very gifted and wanting to become a priest, he found a benefactor who was going to pay for his tuition at the excellent seminary of St. Sulpice in Paris in 1693. However, Montfort gave all he had packed to the first beggar he met on the way, arrived in Paris looking like one himself and could therefore not be received into the seminary since his benefactress didn’t have enough money to make up for the loss nor quite enough to pay anyway. He lived in great poverty, attending lectures in theology for free at the Sorbonne and became gravely ill. Providentially, he survived after being treated at the hospital and was admitted finally to St. Sulpice for his studies, where he became the librarian and acquired an amazing knowledge of spiritual and theological matters that served in well him his later writings. All along his fervent devotion to the bl. Mother carried him through the storms of life.

His Missionary Zeal
Once he was ordained a priest, his great desire was to become a missionary in Canada, but his spiritual advisor counselled against it. Instead, he would eventually become a missionary in Brittany and the Vendée regions in France, but he always had to surmount tremendous obstacles. Passionate in his sermons, he would bring his audience to tears. However, the various bishops in whose dioceses he worked soon sent him away. Even when Pope Clement XI declared him an “apostolic missionary” for France in 1706, he was not welcomed with open arms. Thus he wrote to his sister in 1713: “I have forever to be on the alert, treading warily as though on thorns or sharp stones. I am like a ball in a game of tennis; no sooner am I hurled to one side than I am sent back to the other, and the players strike me hard. This is the fate of the poor sinner that I am and I have been like this without rest or respite…”

In the beginning, the bishop of Poitiers agreed for him to become the chaplain to the poorhouse in Poitiers. He providentially met bl. Marie Louise Trichet who was willing to work with just one other woman in the hospital. He founded with her the Daughters of Wisdom which was at first a small group of the poorest of the poor, provoking ridicule, but would later become a wide-spread order. When he had to leave the second time in 1705, Marie Louise stayed at the hospital for another 10 years until he called her to open with him a school in La Rochelle.

His Parish Missions
During his life-time St. Montfort had the greatest success with his parish missions. He preached with great fervor, offering the sacraments, teaching through catechetical rhymes and hymns that he composed (about 22,000). His writings include his famous True Devotion to Mary, as well as The Secret of Mary, The Secret of the Rosary, The Love of Eternal Wisdom among others.

God asks much of those who love him, so much so that St. Teresa of Avila once quipped that it was not surprising He had so few friends. St Louis was sent from pillar to post. One time he had built a wonderful life-size way of the cross in Pontchâteau that was going to be blessed by the bishop, but had to see it destroyed by the king who had been misled by his counsellor.

His Death and Posthumous Apostolate
St. Montfort died on April 28, 1716 in Saint Laurent sur Sèvre at the age of 43 after just 16 years of priesthood; an attempt to poison him had left him much weakened some years earlier and his hard work did the rest to undermine his strong constitution. However, his apostolate did not end there.

It would take 130 years before his True Devotion to Mary (1712) would be rediscovered and published. St. John Paul II’s love for this devotion and his Montfordian motto Totus Tuus made it gain new prominence in the last decades of the 20th century. Montfort’s calvary in Pontchâteau would be rebuilt in the 19th century and additions continue to be made to this day.

His burning love for the blessed Mother was nourished by his love for Christ. She conformed perfectly to God’s will and thus is the perfect model for us.

Our Lady, Untier of knots undo in us the knots of pride that prevent God from guiding our life and help us see all difficulties in our life as a path towards God.