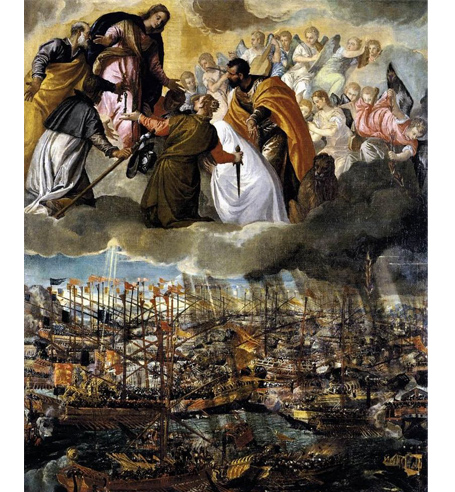 The Battle of Lepanto (1571) was a critical moment in history. The Rosary played no small part in defending Christianity from the advance of Islam into Europe and releasing thousands of Christians who had been held in slavery by the Muslims. In the month of October we turn to Our Lady’s unique gift, the Holy Rosary, to assist us in our spiritual warfare and release us from the knots of our daily problems.

Facing the historical reality of Islamic aggression towards Christianity, Pope Pius V desperately tried to unite the Catholic countries of Europe to save their civilization, but he met with very little success. It was no easy task bringing such diverse cultures together. France, Portugal, and Germany were all involved in other wars, and England had fallen to Henry VIII’s takeover of the Church.
Finally, when the Muslim invaders captured the important island of Cyprus in 1570, the enemies were at the gates, and nine maritime Catholic nations formed the Holy League to defend Christendom from invasion. The combined fleets of these countries assembled for battle under the leadership of Don Juan of Austria, who was 24-years-old at the time.

The Enemy and the Patron
Müezzinzade Ali Pasha and the vicious Mustafa Pasha, protégés of Suleiman the Magnificent, were in command of the Islamic fleet of more than 270 ships, while the Christian fleet numbered only 206 ships but possessed better artillery. However the greater size of the Islamic fleet was a formidable force. The two sides met in the Gulf of Patras, in the west of Greece, on the morning of October 7th, 1571.
Leading up to the conflict, the Pope had called all of Christendom to unite in the recitation of Our Lady’s Rosary as a spiritual force to protect Europe from anti-Christian Islamic aggression. On the day of battle the Christian soldiers went to war with Rosaries around their necks or on their persons, and Christian Europe prayed with the Pope for victory.
While the details of the naval battle are too many to recount here, it is clear that the conquering Christian forces that day attributed their victory to the power of prayer. There was a miraculous change of winds at a crucial moment of fighting that turned the tide of battle in favor of the Christian fleet and led to a decisive victory. The captured Islamic vessels were filled with more than 15,000 Christian slaves, who were liberated when the Muslims surrendered.
It is said that Pope Pius V, seven hundred miles away in Rome, was given a vision of the Christian victory at sea as it took place and went immediately to his chapel to give thanks to Our Lady for her patronage of the Christian effort. The Rosary had won the day.
The feast of Our Lady of the Rosary, which we celebrate on the anniversary of Lepanto, was established by Pius V soon after the battle and originally called Our Lady of Victory. It is an everlasting testament to Mary’s patronage in Christian warfare.

Untangling our Conflicts
The Blessed Virgin Mary is never deaf to the cries of her children, especially those who are consecrated to Christ through Baptism. She helps all who call upon her.
Some conflicts in our lives, like the Islamic oppression of Christendom in the 16th Century, require forceful responses. Often we must fight to defend the things we hold dear. Even if we do not desire it, war is often thrust upon us through the interpersonal and human problems we encounter on a daily basis. Evil exists in the world, and it sometimes tangles us in its web.

But are we to think of Our Lady as a warrior to help us solve these problems?
Yes, because she is the Untier of Knots! With Rosary in hand – which has often been described as a sort of “spiritual weapon” – we turn to her and confront the knotty problems of life with great confidence that she will assist us to find the right solution to all our difficulties.
She defended all of Christendom when a whole civilization humbled itself before God using the simple prayer of the Rosary. Surely she can bring about any victory for her children who turn to her in their need!