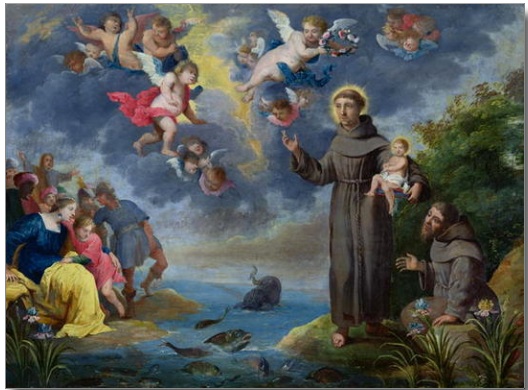 “Where are my car keys?” Oftentimes our prayers to St. Anthony begin in times of minor (and major) distress. The saint of Padua is renowned and revered for his unchallenged intercession when it comes to all things lost – mostly lost property.

Despite his eponymous title “of Padua”, St. Anthony, given the baptismal name, Fernando Marins de Bulhões, was born in Lisbon, Portugal. Born into a noble and wealthy family in 1195, he entered an Augustinian community of the Canons Regular of the Order of the Holy Cross in the Abbey of St. Vincent on the outskirts of Lisbon. But the comfortable life of the Canons – despite the excellent formation he received from them – left him wanting, prompting him to follow the example of a handful Franciscans whom he met during a voyage to Coimbra, Spain. He was immediately sold on their simple, evangelical lifestyle, and St. Anthony followed in their footsteps to preach to the Muslims in Morocco.

Yet St. Anthony is more than a grandmother’s best ally when it comes to misplaced earrings. He is known as the Evangelical Doctor, as a worker of miracles, and last but not least as the “Hammer of Heretics” – something less commonly known about the meek Franciscan.

Unparalleled in education and rhetorical skill, St. Anthony could pick a fight with any unbeliever or heretic he came up against. Countless stories retell his evangelical zeal in preaching which can only be matched by the stories of the Prophets of old.

Rimini, Italy was the “lion’s den” of unbelief and seedbed of heresy on the Peninsula. Fearlessly Anthony went straight to the center of town and preached. Upon encountering ears deaf to the Gospel and mockery from the townsfolk, he went to the seashore and in a dramatic gesture summoned the creatures of the sea by proclaiming towards the bystanders: “Because of your unworthiness of God’s word, behold, I turn to the fishes so that your unbelief may be shown up more clearly.” A school of fish approached, leaped out of the water and stayed on dry land to listen to his preaching. At the end of his sermon, the Saint blessed them and they returned to the water and swam away. In the meantime, so deep was the impression made upon the onlookers that many hurried back to the city imploring their friends to come and see the miracle, while others burst into tears asking for forgiveness.
Yet another story retells his encounter with a staunch heretic who denied the real presence in the Eucharist. St. Anthony one day met the man who mocked him saying that he would only believe in the Eucharist if his donkey were to bow down in adoration. St. Anthony picked up the daunting challenge and instructed the man not to feed the donkey for three days. On the third day St. Anthony met the man and his donkey, bringing with him the Eucharist. The man stood on one side of the stable holding a dish of the donkey’s usual oats, while St. Anthony stood on the other side holding the Eucharist. Although the donkey was starving, he immediately went to the Eucharist and bowed down in reverence.
Countless stories as such show with how much conviction but also simplicity the saint furthered the kingdom of God by his preaching and actions. His zeal, his rhetorical and oratory skill, and the countless conversions he fostered made him the perfect “weapon” against false beliefs and superstition.
Unsurprisingly, due to his unmatched sanctity and fame, St. Anthony earned the “record” for being the quickest canonized saint in the Catholic Church. His canonization followed only eleven months after his death.

St. Anthony and the Virgin Mary
St. Anthony earned the title “Doctor Evangelicus” (“Evangelical Doctor”) and was proclaimed a Doctor of the Church by Pope Pius XII. Two written works of his undoubted authenticity are the Opus Dominicale and Opus Festivale, Sermons for Sundays and Feast days respectively.
In his works he returns often to the theme of the Virgin Mary.
A central element of his Marian devotion was his conviction that Mary had been immaculately conceived: “The only begotten God when he was conceived took true flesh from the Virgin, and when he was born, he preserved the integrity in his Mother.” When it came to the question of sin and the Virgin Mary, he liked to cite St. Augustine saying: “Where there is a question of sin, exclude as far as I am concerned, the Blessed Virgin Mary.” The saint added: “from the universal confession of sin Mary among all creatures is to be excepted for She was ‘full of grace’.” She was “pure”, “free from sin”, and “full of grace” in the utmost perfect way.
This conviction – common among his Franciscan friars – was bequeathed to the famous Franciscan theologian Bl. John Duns Scotus (1266-1308) and later to be cited in the Apostolic constitution Ineffabilis Deus of Pope Pius IX, with which the Pope proclaimed the Dogma of the Immaculate Conception.
“O cherubim, seraphim, angels, and archangels! Avert your gaze, bow your heads and reverently adore the temple of the Son of God, the sanctuary of the Holy Spirit, the blessed womb set about with lilies!,” proclaimed St. Anthony in reverend awe before the Mother of God.
Not just her Immaculate Conception, but also her Perpetual Virginity, her Motherhood of God, and her Assumption were deeply rooted in the faith of the Franciscan saint.
Therefore it was only fitting that St. Anthony drew his dying breath by intoning his favorite Marian hymn: “O gloriosa Domina”…

O Heaven’s glorious mistress,
Enthron’d above the starry sky!
Though feedest with thy sacred breast
Thy own Creator, Lord most high.
What man had lost in hapless Eve,
Thy sacred womb to man restores,
Thou to the wretched here beneath
Hast opene’d Heaven’s eternal doors.
Hail, O refulgent Hall of light!
Hail Gate august of Heaven’s high King!
Through thee redeem’d to endless life,
Thy praise let all the nations sing.
To the Father and the Spirit
And to thy Son all glory be,
who with a wondrous garment
of graces encircled thee.
Amen.
Our Lady, Untier of knots Lady, please loosen the knots of disbelief, false beliefs, and heresies that are plaguing our world. Let the light of truth enter our souls!