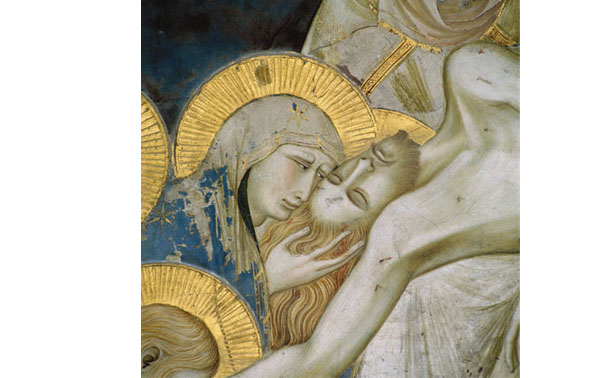 Eve had it easy, for she “merely” had to grapple with a temptation appealing to her as yet un-awakened concupiscence and pride. She wasn’t driven by suffering to find some release in pleasure or power, as we so often are. The new Eve, however, the Virgin Mary had it much harder, for she had to contend with terrible sufferings that not only broke her heart, but also seemed to make no sense.

Standing under the cross, seeing her divine Son die while onlookers were deriding their Savior must have been a dark night of the soul, the depth of which we cannot fathom. In comparison to it, most forms of spiritual darkness must seem like a mere fog. And yet, she did not fall, she did not doubt, she did not lose her hope despite the seemingly catastrophic outcome of Christ’s life on earth.
People often reject God because of their suffering – though not only and not always. Pride has its part to play, as well as becoming enslaved to a certain life-style. But great suffering is something every person of faith has to grapple with. The natural reaction is to ask “why me?” and “what have I done to deserve this?”. At the very least, one expects God to console one’s broken heart and give meaning to tragedies that have apparently destroyed all possibility of human happiness. And yet, He often seems absent in precisely these situations. The easy way out is rebellion, be it against other human beings – whether they are at fault or not – or against God. Rebellion, being a form of anger, numbs the pain, propels it out of one’s heart and unloads it on a scapegoat. And the perfect scapegoat is God, for He does not retaliate.

We act out of our wounds and anger and don’t even notice it. It is so easy, such a natural reaction and so understandable. Christ asking His Father to forgive us since we don’t know what we are doing partially had this in mind, I think. Yet, we stay in our anger to our detriment. For by rebelling, we reject love and ensconce ourselves in our Hell that we have created in order to avoid suffering, thereby closing us off from the only thing that can heal our throbbing wounds – Love itself, the triune God.
The blessed Mother shows us how to deal with suffering, for she knew how to stand under the cross, nay how to be on the cross with Christ. Christ dying, having His heart pierced and then lying in her lap must have broken her own to an extent that is beyond our understanding. But these were not her only sufferings: hearing Simeon’s prophecy that her heart would be pierced by a sword because Christ would be rejected, having to save baby Jesus from Herod by fleeing to Egypt, losing Christ as a boy in the temple and finally meeting with Christ as He was carrying His cross to Calvary are the other wounds generally included in the seven sorrows of Mary. Yet many others come to mind: not being able to share with Joseph her conception of Jesus through the Holy Spirit since the divine secret was not hers to tell while seeing his sorrow and failure to understand; giving birth in a stable after having been turned away in Bethlehem and hearing later about the mass murder of the Holy Innocents; Joseph’s death, witnessing those rejecting Christ who believe He is possessed or mad, the multiple attempts on His life, and noticing how Judas swerves and finally betrays God Himself.

These are all moments in Mary’s life to meditate about, for they show us how to suffer even and especially when we don’t understand, by keeping our eyes on Christ. Let us give her our wounds, whether they are caused through our sins or those of others or simply through tragic events, so that they may not turn into knots of resentment, rebellion and anger. And if they have, then she will soften them through the Love of her Son and teach us how to love not only despite them, but through them. Christ’s heart needed to be pierced to let His mercy envelop the whole world. If we allow ours to be broken rather than hardened, then we too can be united to Him and our pain will become fruitful.

Our Lady, Untier of Knots, pray for us!
Marie Meaney
Source: https://en.wikipedia.org/wiki/Pietro_Lorenzetti#/media/File:Pietro_lorenzetti,_compianto_(dettaglio)_basilica_inferiore_di_assisi_(1310-1329).jpg