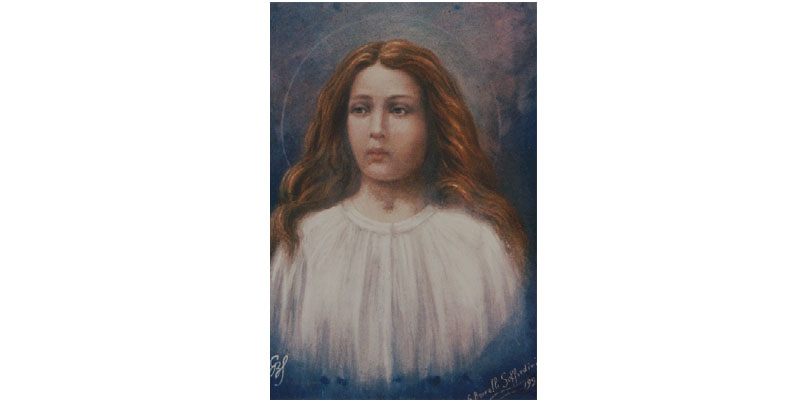 How a twelve-year old girl from Italy offered her sufferings to the Lord to save a soul.

Tragedy struck the small village of Le Ferriere the summer of 1902 when little Maria Goretti was killed in Nettuno, Italy. On a hot summer day in July, twelve-year old Maria was faithfully tending to her household duties, hemming a shirt in her home. It was then that her eighteen-year old neighbor, Alessandro ran up the stairs where she was sewing, grasped her and forced her into her bedroom. As she cried out for help she said to her attacker “No, God does not wish it…it is a sin.”
She prevented him from raping her, but he then viciously stabbed her fourteen times. She was taken to the hospital and died less than twenty-four hours later.

Rather than cling to bitterness and resentment towards her attacker, Maria courageously surrendered her life to Jesus and prayed for Alessandro as she lay dying. Rather than seek for ways in which she could find revenge against Alessandro, forcing him to feel regret and shame, she allowed the Lord to use her suffering as a prayer as she suffered with grace. In a spirit of simplicity, Maria stayed close to Jesus, trusting in his goodness and love for her. This trust was no doubt fostered by the great faith and example of her parents, who understood their family to be a domestic church, the primary place where their children would learn to grow in holiness. Their witness was the groundwork for Maria’s spiritual life and of her merciful heart, which brought her to the point of forgiving her attacker.

Pope Saint John Paul II said that the church “continues to defend and to champion the value of sexuality as a factor that involves every aspect of the person and must therefore be lived with an interior attitude of freedom and reciprocal respect, in the light of God’s original plan”. Maria exemplified this reciprocal respect when she was concerned not only for her safety, but also for the state of her attacker’s soul. Just as Maria’s life of virtue was founded upon the example of her parents, Maria’s example planted a seed of faith in Alessandro’s life. Alessandro, unlike Maria, was very bitter and resentful after his thirty-year prison sentence was given to him, but after a dream where he saw Maria gathering flowers for him, his life was changed. When he came to realize the sin he had committed, he begged pardon from God, and he asked forgiveness from Maria’s family once he was released from prison. In 1950 Maria was canonized a Saint and her attacker, Alessandro Serenelli, was among the 250,000 people gathered to honor her on that day.

The reliquary containing Saint Maria Goretti’s body can be found in the Basilica of Our Lady of Graces and Saint Maria Goretti in Nettuno, Italy, where her bones are enveloped in a wax likeness of her body. Being in this church can’t help but make one ask oneself: « Who in my life do I struggle to love? Who am I resentful towards? ». If a child of twelve can courageously endure fourteen painstaking stabs and still forgive her attacker, then we too ought to forgive our neighbors for much smaller injustices. As John Paul II said, “The only way to peace is forgiveness”. Are you at peace? I know that I will be asking Saint Maria to pray that I have a more merciful heart, and I hope that you too will consider adding her to your list of intercessors to ask ‘Mary Untier of Knots’ the grace of forgiving what – on a human level – may well seem unforgivable.