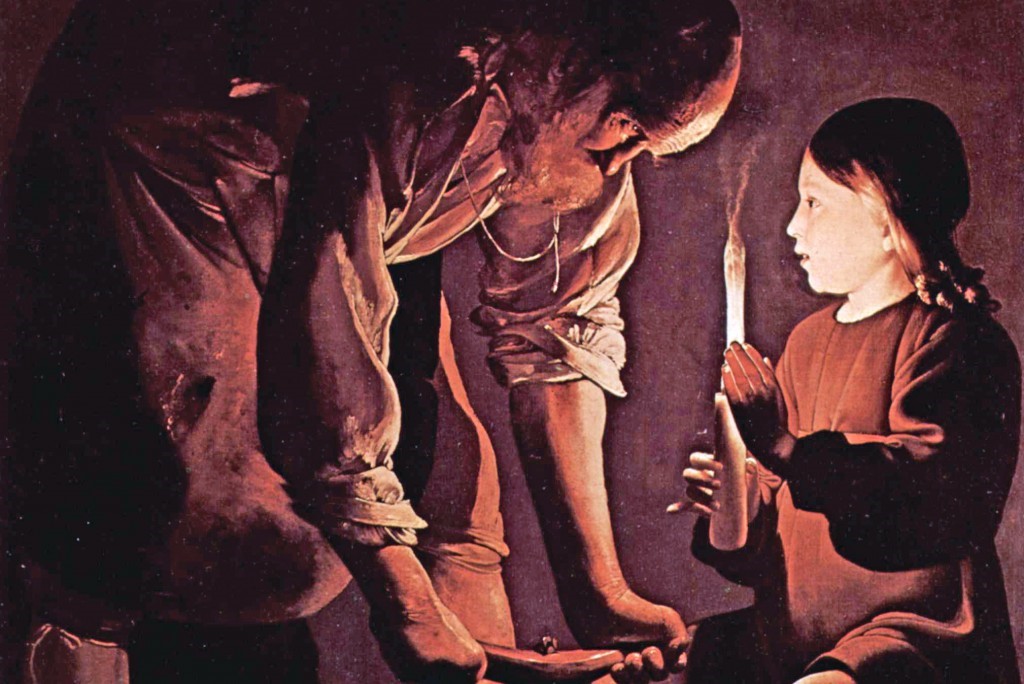 St. Joseph is the friend and ally of all believers: he is the patriarch of God’s holy people, the saint of workers, and the patron of the Universal Church. We owe much to his constant assistance. Only in heaven will we see how fully the silent saint has interceded for our welfare. Above all, we owe him gratitude for his abiding union with Jesus and Mary and his attentive care on behalf of all who turn to him for help.

The Worker’s Example
When Jesus cured the crippled man by the Pool of Bethesda, His adversaries asked Him why He had performed a miracle on the Sabbath day. His explanation was perfectly simple: “My Father is at work until now, so I am at work” (John 5:17). In this phrase, we may perceive something beyond the obvious reference to His heavenly Father. Perhaps Jesus was also recalling the deeply engraved image in His Heart of the diligent man He saw “at work” on a daily basis in His youth: Joseph, the Worker.
A craftsman in first century Palestine did not have an easy life. In all but the most prosperous modern societies, a laborer had to work sun-up to sundown to support his family. So we imagine St. Joseph constantly at work fulfilling his obligations to his family and serving others with his craft. His work ethic must have been formidable.
The child Jesus was certainly formed by Joseph’s example of work as we can see manifested in His later years of public ministry. The Gospels testify that Jesus often worked to the point of exhaustion and never stopped teaching, preaching the Good News, and working miracles. Only on the Cross did He decree that His work on earth was complete: “It is finished” (John 19:30).

The Patron of All Patrons
One hundred and fifty years ago, Pope Pius IX bestowed upon St. Joseph the title of Patron of the Universal Church. In 1955 another pope named Pius (XII) declared St. Joseph to be the patron saint of all workers and established May 1st as his yearly feast day. Joseph’s patronage of workers and his oversight of the Church are like two sides of the same coin. Work is the most extensive human activity, and Joseph watches over all honest efforts to support lives, families, and societies. The Church teaches the essential dignity of all work, and Joseph is its universal patriarch.
By God’s decree and by confirmation of two modern popes, St. Joseph is the overseer of all God’s treasures. He is the supreme caretaker of the mysteries of God (Genesis 41:55), and the obedient and loyal steward (Luke 12:42), to whom God has entrusted His most precious gifts.
No other saint, other than the Blessed Virgin herself, has such authority over us or care for us! No other saint has been entrusted so perfectly by God to attend to the needs of every soul in His family.

A Coalition of Love
It is fitting that Joseph should share a concern for all souls and a universal mission with the Mother of Christ. On earth they formed a coalition of love, shaping deep habits of purposeful work in the young Jesus to equip Him to carry out His mission of salvation for all of humanity.
But Christ’s eternal mission of salvation has not yet been brought to completion. It will last until the end of time when the harvest of souls will be fully gathered. Joseph and Mary “work” tirelessly with their divine Son through the course of history to bring every soul to heaven. We can and we must turn to Joseph, as we do with Our Lady, and beg for his intercession. St. Teresa of Avila often said that she never made a prayer to St. Joseph that was left unanswered.

Confidence in Joseph
Our confidence in our patron, Joseph, may express itself in many forms: asking him to undo the knots of our difficult problems; interceding for the difficulties and concerns of others; asking for his help in providing “our daily bread” when we struggle to make ends meet; praying for his strong work ethic to inspire us to be faithful to our vocations and our duties, etc.
Would Joseph, to whom the treasures of heaven are entrusted, refuse anything to God’s children who turn to him for help?
Holy Mary, Undoer of knots give us a share in your deep love for Joseph the Worker, your spouse and confidant, and together with him, guide us through the difficulties of this life to the joys of the next!