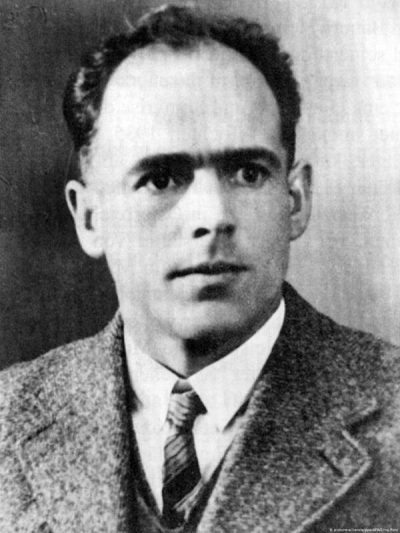 Some of the dissenters and martyrs during the Third Reich came to prominence because of their courageous fight against Hitler like the students of the White Rose or Stauffenberg and his circle. They took action and paid a high price. Franz Jägerstätter is unlike them in that he didn’t do anything grand; he didn’t attempt to assassinate Hitler or write tracts against him. His was “A Hidden Life” as the new movie by Terrence Malick is so aptly called; his sacrifice at the time seemed useless to the people in his village. It would not inspire any following, would happen largely unnoticed and seemed pointless – until many years later.

Yet this hidden life has now become much more widely known through the filmographic monument that Malick set for Jägerstätter. The incredible vistas of the Tyrolian mountains, the quaint farms, the interiors of houses that could have been painted by Dutch artists from the 17th century make for an aesthetic experience that is intoxicating, yet sometimes borders on kitsch. The marriage of Franziska (Fani) and Franz Jägerstätter (played by August Diehl and Valerie Pachner) is built on deep love and nourished by their faith. They are almost like a new Adam and Eve, surrounded by their three beautiful daughters, except that their post-Fall Eden requires back-breaking work on the farm. And then a totalitarian regime is about to demand a bloody price for failing to adore its idol.

The atmosphere feels all the more authentically Austrian in that the German/Austrian actors are speaking with a slight accent in English, use expressions and build their sentences in a way that German speakers do. But they do not speak much, especially not Franz. The movie’s strength is also its weakness. Does Malick get so caught up in his images that he does not want Franz to argue for his decision? Was that part of the hidden life aspect to remain voiceless, since he was considered a traitor for many years?

I think it ultimately is a disservice to Jägerstätter and leaves the spectator who doesn’t happen to be educated in Catholic doctrine puzzled as to this man’s choice. For Jägerstätter was a man well formed in his faith who could defend his position when necessary. He could have explained that one may never participate formally in evil, but must do what is right whatever the consequences. Its usefulness or lack thereof is irrelevant.

Jägerstätter had started reading the Bible daily as well as other religious writings after his return to the Catholic faith, once he married his wife in 1936; he often went to mass during the week. He must have been an articulate man, since he was offered the position of mayor of St. Radegund in 1938 after the Anschluss. He rejected the post and was the only one who voted against the Anschluss in his village. It is after his military training between 1940 and 1941, that he decided to refuse serving as a soldier if he were drafted. The Nazi euthanasia program as well the persecution of the Church strengthened him in his resolve as did a dream he had in January 1938 where he saw a train onto which many people were boarding, but which was headed for hell – something also taken up in Malick’s film.

The priest in the movie is presented as a coward. In reality, the parish priest at St. Radegund was arrested on July 10, 1940 for preaching a sermon against Nazism. Andreas Schmollner, head of the Franz und Franziska Jägerstätter Institut in Linz, Austria, points out that 800 priests were arrested, sent to prison or concentration camps while 1,100 were in some way sanctioned – which makes up 25% of the clergy in Austria. Though bishop Josef Fliessner of Linz advised Jägerstätter to do his military service, the previous bishop, Johannes Maria Gföllner, had stated in 1933 that “one cannot be at the same time a good Catholic and a real National-Socialist”. The actions of the Austrian clergy were mixed, but it would be wrong to see only the cowards or ideologues.
The devil has his part to play in the movie: the mayor of St. Radegund tries to speak “sense” to Franz, but without avail. So do the priest and the lawyer in prison up to the last moment. Malick makes it seem like Jägerstätter could have served as a paramedic, had he only wanted. In reality, he suggested this himself to the court, but his petition was denied.

The film shows graphically the consequences of Jägerstätter’s decision: not only is he tortured in prison, but he knows his wife will have to run the farm on her own (which is back-breaking work, even for Franz). She is spat on and ostracized by the village. Even her mother-in-law blames her for her son’s decision. The choice is carried by both spouses; their union is built on the rock of the sacrament and can therefore withstand the tempests to come. Jägerstätter has to brave the gruesome procedure of being guillotined on August 9, 1943. Franziska has to live another 70 years without him, but will have the joy to being present at his beatification by Pope Benedict XVI in 2007. One may wonder who ultimately had the harder life. But one thing is clear: he could not have done it without her. Perhaps she too will one day be beatified and then, like the parents of St. Therese of Lisieux, they can be canonized together.