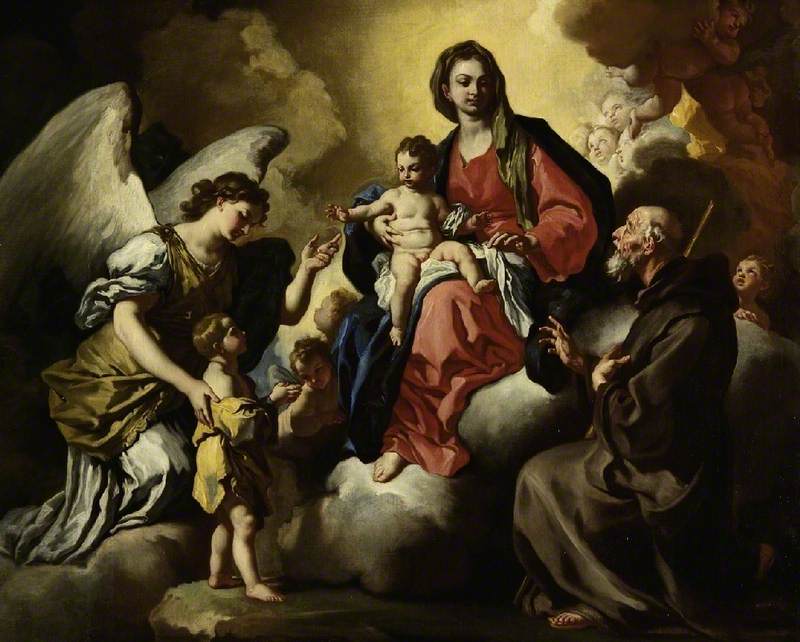 Our Lady is the great lover of the Guardian Angels whose feast day we celebrate on October 2nd every year. She loves them because they are the angels closest to the human race. All angels touch human existence in some way, but the Guardian Angels are assigned to protect our souls, which are the special target of the devil’s malice. Mary is especially close to those angels who watch over us constantly on our way to heaven.

The Nine Choirs
Traditional angelology divides the entire angelic host into nine “choirs” or cohorts of angels with St. Michael the Archangel as their supreme commander. The names of these angels come from scripture: the first two (Seraphim, Cherubim) from the Hebrew and the rest from the Greek, particularly the letters of St. Paul (who speaks of Thrones, Dominions, Virtues, Powers, Principalities) and elsewhere in the New Testament (Archangels and Angels).
Roughly speaking, these cohorts of angels stretch from heaven through the universe down to our humble earth. This type of military-style organization shows the highest, mightiest, most glorious angels at the top nearest to God while the lowliest angels inhabit the other end of the spectrum with the mission of attending to man.
The Seraphim are closest to God; they are the generals of the angelic army. The Guardian Angels are closest to man; they are the foot soldiers in the great battle for souls. Our Lady is Queen of them all.

Mary Loves the Guardian Angels
If Our Lady has a preference for one choir of angels over another, it is clear that she has a special love for the work of the Guardian Angels as they guard humanity from the attacks of the demonic world.
These are the angels who sang “Glory to God” to the shepherds on the night of Jesus’ birth and accompanied her Son in His sacred humanity throughout His life. They are the angels who protected the Holy Family on their flight into Egypt and from the diabolical schemes of Herod.
Mary loves the Guardian Angels, and they love her! More importantly, they work together, Queen and soldiers, to strengthen the life of grace in all souls who ask for their help.

Angels Carry Out God’s Will
When Our Lady receives the prayers of the faithful and presents them to God, she hears His reply and then turns to implement God’s will in their lives. How does she assist so many of the faithful who turn to her?
We can imagine that she simply taps an individual’s Guardian Angel on the shoulder and whispers God’s will in the angel’s ear. From that point on, the angel has his marching orders to help the soul in his tangible concerns but above all in his spiritual needs.
The difference between a human soldier and an angel is love. Soldiers obey by force of law. Angels love and obey with deepest joy whatever Our Lady asks of them. They always know that their orders are in accord with God’s will and are always zealous and diligent in carrying them out.
Whatever their Queen asks, they do.

A Soul in Need
In recent days a companion of mine asked me to pray for another friend who grew up without any faith despite having numerous fervent Catholic influences in his life. He is a good and decent man himself but has been unable to make an act of faith throughout his entire adult life. He had some obstacle to grace that he personally could not overcome.
The poor man received a cancer diagnosis recently, which gave him only a short time to live. Without a sense of faith, he was distraught at the prospect of death and a future of “nothingness”.
My companion and I then “conspired” with the three Guardian Angels (mine, his, the man’s) and prayed to Our Lady to bring this man out of the darkness. We then decided to ask a mutual priest friend to visit the man in the hospital, and when Father visited, the man somehow miraculously accepted the gift of Baptism from his hands!
I’m happy to say that this good man is still persevering in this life, but he does so now with an inner hopefulness that he did not have before. Now we conspirators pray the Guardian Angel Prayer that the holy ones will “enlighten, guide, strengthen and console” him as he comes to the end of his earthly life and enters into fullness of Life rather than nothingness.

Our Lady, Untier of Knots, obtained this great blessing for a soul in need, and we are deeply grateful that she sent her holy angels to assist him. Holy Mary, command the Guardian Angels to come to the aid of all souls in distress today and all days.