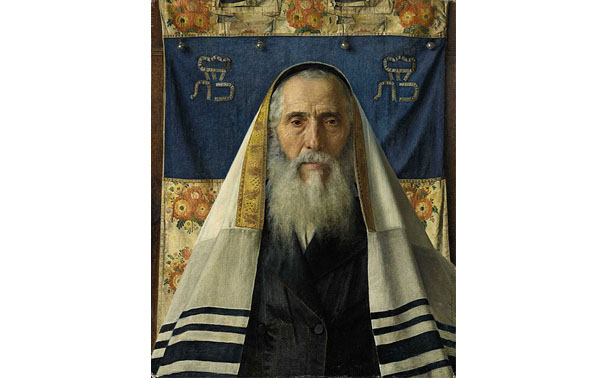 Touching the fringe of Jesus’s garment as it is related in the Gospel, reminds us of the ritual prayer shawl or talith worn by pious Jews. For it is with the fringes of these shawls that one dares touch the Torah, the scrolls of God’s word. How significant that believers in the time of Jesus understood in this way and recognized his divine discourse.

Fringes of the talith
The fringes hanging from the prayer shawl are furthermore a reminder of God’s commandments. According to rabbinical law, each fringe is composed of eight threads and five knots which – when counted – amount to 613, the number of prescriptions in Mosaic Law described in the books of Numbers and Deuteronomy.
According to the Midrash, the prayer shawl is supposed to cover the head and shoulders of the worshipper in veneration of God’s presence, enveloping the person as a means of protection. In Isaiah 40:31, the talith is also called a “tent” in which one finds oneself “under the shelter of his wings”. The 613 commandments refer to the numerous precepts on the dietary laws and hygienic behavior appropriate to the children of Israel. The knots and fringes worn daily are thus reminders of the intricate requirements of Jewish law, even though we know the Lord’s complaint from the prophet Isaiah: “This people honors me with their lips but their heart is far from me” (Isaiah 29:13).

Jesus Christ, the first untier of knots
With the coming of Christ, Jesus renews God’s message: he has not come to abolish the law, but to accomplish it. Instead of going into the minute details of its structure, Jesus points to the first and most important commandment the Jews know as the Shema: “Hear, O Israel: the Lord our God is One (…) You shall love the Lord your God with all your heart, all your soul and all your might…” (Dt 6:4). In Matthew 22:37-39, Jesus declares: “Love the Lord your God with all your heart, all your soul and all your mind. This is the first and greatest commandment,” which sums up the entire Law of Moses. “And a second is like it: love your neighbor as yourself.” He adds: “On these reccommendations depend all the Law and the prophets.”
The Pharisees obeyed scrupulously the rabbinical interpretations of the Law, claiming to attain their justification before God thanks to the necessary purity it imparts. But we read that Jesus reproached them for “binding heavy burdens hard to bear, laying them on men’s shoulders”. The practice of the Law tends to make one forget its purpose. “You leave the commandments of God and hold fast the traditions of men” (Mk 7:8) and “there is nothing that enters a man which can defile him (…); from within the heart of man come evil thoughts and actions” (Mk 7:21,22).

Mary who unties the knots
Here and throughout the Gospel, Jesus, the Son of God appears as the first untier of knots. Before leaving it to Mary, his virgin mother, he paves the way to a true simplicity in man’s relationship with his Creator. Pious men frequently make it a point to remember intricate laws, while Jesus demonstrates his divinity by healing those who approach him in faith, merely by touching the fringe of his garment. Since that time, the Virgin Mary continues the spiritual feat of untying the knots of complication, anxiety and guilt we still retain, to make us understand the love of God. For what could true piety mean without love and adoration under the wings of almighty God.? Saint John Paul II gives us the final answer: “The secret of inner peace is trust in God.”

Mary, Untier of knots, please pray for us!