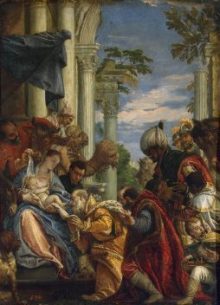 God is full of surprises. His plans go against our all too human expectations, undermine our prejudices and break open the narrow, conventional world we, beaverlike, keep (re)constructing around us. For conventionality is a common human temptation and besets us often unbeknownst to ourselves.

The most bohemian, cultured or educated life-style does not protect us from its lures. For the moment we exclude the supernatural from our lives, we become in the deepest sense conventional even if in other respects we do not follow modern fads.

The Temptation of Excluding the Supernatural
Believers are not immune to this danger; this is true in our days as it was in ancient times. Those who should have welcomed Christ’s birth, the priests in the Temple who were supposed to be impatiently desiring His coming, did not deign to accompany the Magi who had travelled far to see this new King whose arrival had been announced by the unusual constellations of the stars. How would the priests and scribes have reacted to a child born in a stable? Their unwillingness to go to Bethlehem where the Messiah was supposed to be born gives us a good guess.
We are so used to this image of a babe in a creche that we fail to realize its shocking radicality. And yet, how could God have made more manifest to us His breathtaking humility? First announced by angels to shepherds, who were among the lowest ranking people in that society, this child is nonetheless a King though His Kingship revolutionizes our most common expectations. Herod as the paradigmatic power-hungry pragmatist merely perceives in Him a threat to his own unstable kingship, a menace to be eliminated. That this King is the announced Savior, the Redeemer who will do much more than merely be the King of Israel is of no importance to him. The murder of every child up to two years old in Bethlehem is a small price to pay, in his eyes, to maintain his power.

The Wise Men
But while the Jewish dignitaries fail to give homage to this divine King, the wise men from the Orient bring Him royal presents – the gold referring to His divine Kingship, the frankincense to His priesthood and myrrh to His being a prophet as well as already foreshadowing His death. Not only did the Magi have the wisdom to recognize the signs of the times even though their own culture had not been prepared for this event over centuries like the Jews had, but they took on themselves the hazards and toils of a long journey without the certitude of reaching their goal. Finally, they had the humility to recognize the child in the stable as this announced King, and wonder at the miracle unfolding in front of their eyes. Many great artists have captured the humble and loving gaze of these men who kneel in reverence before baby Jesus.

The Creche and the Cross
But this moment of pure love and bliss is already overshadowed by the Cross. This is not fortuitous, since Christ’s kingship would only be fully revealed when He was crucified like a common criminal, crowned with thorns and mocked by the crowd; for once He would be elevated from the earth and His heart opened by a lance, would He draw all men to Himself (Jn 12:32). Christ’s Reign is one of Love. Only those whose heart is like a child’s can understand this while others will feel threatened in their pride, vices and set ways. Yet if they allow this child to break down the walls of their pride and of their idols (like, for example success, money, sex) that give them a false sense of security, of importance and evanescent fulfillment, then they too can become like Him and be saved. Otherwise they will be lost, clinging on to those things they have preferred to Love itself.
The Magi and the shepherds – though outwardly quite different in the eyes of the world – are therefore very similar. They have been drawn by Love and they shall not be disappointed, for this Love assures them despite, or even through the sufferings on earth, an inner Heaven that makes their hearts sing.

Our Lady, Untier of Knots, we beg you to undo the knots of pride, blindness and small-mindedness that make us close the door of our hearts to the heavenly King who humbly pleads with us to let Him enter.