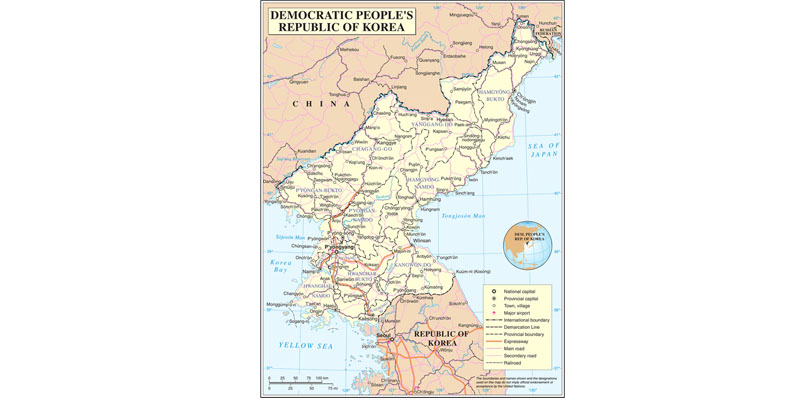 We entrust to ‘Marie who defeats the knots’ the very serious situation of North Korea.

North Korea has devolved into a hereditary totalitarian dictatorship with possibly the worst human rights record in the world. A terrifying combination of aggressive nuclear weapons and ballistic missile development and a young and erratic supreme leader have focused international attention on this hermit kingdom of 25 million souls.

Humanly speaking, there is very little hope for a peaceful transition from militarism and political repression to a democratic and human rights respecting nation. The state’soppressive apparatus survived the collapse of the Soviet Union and most of its satellite Communist states. A massive famine starting in 1995 led to hundreds of thousands of deaths and severe infant malnutrition over a period of three crisis years, but the government was able to maintain strict control over the population. Even the death of the second hereditary dictator, Kim Jong-il, in 2011 did not lead to any significant positive changes. Prayer for the supernatural intercession of Our Lady Untier of Knots is perhaps the only real possibility for defusing this tragically dangerous situation.

Religious belief is heavily persecuted in North Korea, and it is estimated less than 2 percent of the population is Catholic. As the most isolationist nation on earth, most missionaries have no possibility of working there. Still, there is no reason to despair. The Korean peninsula has a long history of isolationism and martyrdom of Christians. The first Korean Catholics were lay leaders beginning in the 17th century who managed to keep the faith alive and growing with no priests to serve them under a brutally repressive regime that systematically killed all priests and Christians they discovered until as late as the 1880s. In fact, Korea ranks fourth in the world for canonized saints, due mainly to the many thousands of martyrs.

A lot of conversions

Prior to the Korean War in the 1950s, two thirds of Korean Christians lived in what is now North Korea. A third of South Korea’s population is now Christian and the percentage is growing through conversions and the passing of the elderly generation that has a smaller proportion of Christians than the population as a whole. In South Korea the percentage of Catholics grew from 5% of the population to 11% from 1985-2005. South Korea alone sends more Christian missionaries abroad than any other nation except for the USA.

We pray Our ‘Lady Untier of Knots’ to help break the chains that bind the suffering people of North Korea and spare the world the catastrophe of a nuclear conflict that could arise from the ruling regime’s actions. In addition, we pray that all the Korean people, North and South, will be reunited and grow in faith and love.