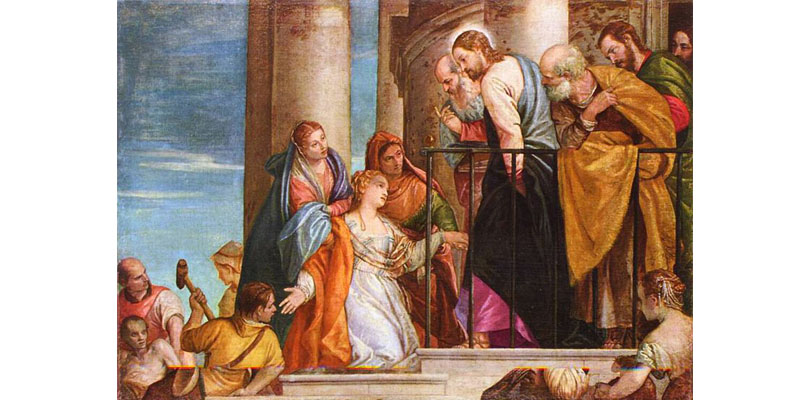 On the occasion of the feast of St.Gilles, who is usually invoked in case of mental illness, we are publishing the testimony of a mother who prayed the Virgin Mary, so that the “knot” of mental illness of her daughter would be untied.

Powerless before my child’s mental illness, I found comfort in meditating upon the woman in the Gospel who declared that if she could touch but one of the fringes on Jesus’s prayer shawl, her daughter would be cured.
I remembered how in the synagogue of my youth, on certain feast days the rabbi would walk in procession with the Torah in his arms while the men would rush to reach out to the scrolls enveloped in embroidered silk, trying to touch them with a fringe of their shawl which they had kissed beforehand. I then thought about Mary at home smoothing out the cloth of her divine Son’s taleth, no doubt undoing any untimely knots as she knows so well how to do. I prayed to her, asking to let one of them be my own daughter’s cure and that this untying of the intricate knots of multiple psychosis would be an opportunity to come closer to Our Lord.
Last summer during my pilgrimage to Lourdes, I cried so much while praying to Mary that I thought the water in the baths of the sanctuary would overflow. As I bathed, I could hardly pronounce my daughter’s name who was so ill that she didn’t recognize me anymore. The aids helped me out of the water as I came to stand before a short little lady with curly hair. She didn’t ask me any questions but said I should attend mass every day for thirty successive days, after which “things would change”. Maybe she was an angel, I thought, but didn’t bother to ask. I took her up on her word and went to mass daily for the following month. That was a feat in and of itself, given that I live in rural area where priests and masses are scarce!
After that, I went to see the doctor at the hospital where my daughter was committed, hoping that she would finally consent to see me. To my great surprise, she agreed and even allowed me to take her into my arms. Though she didn’t say anything, she didn’t chase me away either. I asked her to write a short letter to her employer – something she had refused to do for the past year. This was necessary so that she would continue to receive benefits and eventually be able join the work-force again. She did so, writing it in one stroke without one single spelling error. Despite her warped perception, she seemed to recognize me. I felt the first knot was being loosened. The visit to the hospital was a success, but the road would still be long to untie the knots of her multiple psychoses.
I now cherish the image of Mary at home ironing the young Jesus’s taleth as well as that of the woman who thought that to touch the fringe of his shawl would be enough to cure her. My daughter has made great progress and with Mary’s help, I’m sure she will recover her sense of reality and her joy.
In his prayer regarding mental illness, John Paul II said so beautifully that a soul guided by Mary would be close to her divine Son.

Our Lady, Untier of knots, please heal all those afflicted with mental illness.
Thank you, Jesus and Mary. Thank you forever.
J.C.