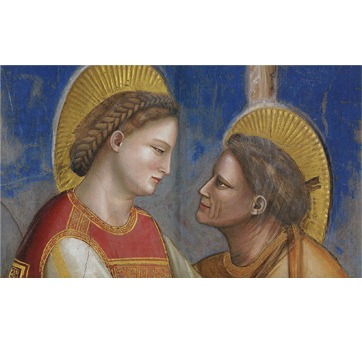 Sometimes time stands still. The present becomes so saturated with meaning, so pregnant with love that time no longer seems able to contain it.It has already become eternity, spilling over into the yonder, tearing open the veil separating us from Heaven. The Visitation is one of these superabundant moments where the human heart appears too small for such infinite joy. It takes art to convey something of this encounter, give us a glimpse of the exchange between Mary and Elizabeth. Giotto, like no other, captures this instant, where everything is contained in the gaze between the two women.

Immediately after the Annunciation, Luke tells us Mary went in haste to her elderly cousin who is with child. She seems to get up (“arose” it says in the King James Version Lk 1, 39) after her momentous encounter with the angel, only to rush to Elisabeth. One might have expected another episode before Mary leaves, of her going, for example, to Joseph to let him know what had happened. But this secret was not hers to share. It was God’s and she could therefore not tell her betrothed about the Holy of Holies having taken abode in her as the new arc of the alliance. It takes an angel coming to him in a dream to let him know, as Matthew this time, and not Luke, relates (1, 20). Elisabeth, however, understands without being told. The babe leaping in her own womb announces to her the coming of her Savior, present in Mary’s body. Filled with the Holy Spirit, she is the first to greet Jesus other than His mother (and John the Baptist), and the first to share her secret.

The moment depicted in Giotto’s fresco seems to come before all speech, yet when everything, in a sense, has already been said. The elderly Elizabeth bows gently down before the blessed Mother, intending to kneel perhaps, but is prevented by Mary holding her up. Elisabeth looks at her full of love and reverence, for who is she “that the mother of her Lord should come to her”. And Mary in all simplicity – for nothing is as simple and humble as holy love – allows her to gaze at her and adore the one who is in her womb. Mary therefore has a queenly look, not one filled with any thought about her own greatness or merit – for she believes in neither – but because she radiates God’s glory, being His tabernacle for the next 9 months. Fully anchored in God, she follows no other law but His, being untouched by original sin that would make her prone to be tossed in the storms of human passions or subject to the Zeitgeist – this alone would be enough to turn her into a queen.

And because she is unconditionally rooted in the supernatural, she can be present to others in the world like no other. She is fluent in the language of love that we only learn with great difficulty, in a stuttering and faltering way. Hence her gaze at Elisabeth is replete with this love and more expressive than many a word. Here truly a cor ad cor loquitur is happening, not only between the women but between their children. For John the Baptist realizes Christ’s presence before his mother does. And his encounter with Christ is so momentous that he is healed from original sin, that original wound that makes us doubt in God’s love. How fitting that the one announcing the coming of the Messiah should be the one to recognize his arrival first, second only to Mary!
Since everything is contained in this look, the rest of the setting is stark so as not to deflect the onlooker’s attention. No town, no palatial houses in the background, but only an entrance with a few women standing around. The one in the foreground on the left and the other on the right look directly at the two cousins, but seem somewhat removed, probably unaware of what is happening, in any case not part of this exchange; the third has her eyes turned on the first carrying a piece of cloth (both probably servants), thinking possibly of some practical arrangements needing to be made.

But back to Mary and Elisabeth: The words during such a meeting would have to be themselves brimming over with significance. It is therefore not surprising that Elisabeth’s sounds like a poem and that Mary’s canticle calls to be put to music, uniting in symphony all the arts to reflect God’s glory. While Mary magnifies the Lord, Elisabeth blesses her among all women. Magnificat anima mea, Dominum!