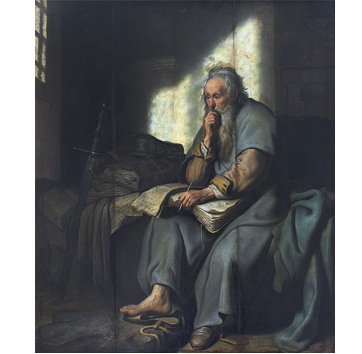 Often, we desperately try to untie the knots in our lives that cause such suffering. Yet these knots, when lovingly accepted, become part of the beautiful tapestry of our lives. From eternity we will see how precious they are in God’s eyes, and frequently much more significant than any successes we experienced. Sometimes God allows us to catch a glimpse of the way He weaves our lives together into a story of salvation. Let me give an example of this.

Father Gordon MacRae
The Catholic priest, Father Gordon MacRae, was falsely condemned on trumped-up charges of sexual abuse in 1994 and has been in prison since then, refusing pretrial deals that would have shortened his sentence to merely one to three years had he been willing to confess to something he hadn’t done. This sad story will be covered at a later point. Though these 25 years in prison caused great suffering to Father Gordon, they have not been wasted. His presence there has changed the hell of prison into a haven of salvation for some of his co-prisoners. One of them is Pornchai Moontri from Thailand who had killed a man in a drunken stupor in 1992 in Bangor, Maine.

Pornchai Moontri
Pornchai was a very angry man, filled with hatred who had spent 6 of his then 14 years in prison in solitary confinement in Maine before Providence led him to the New Hampshire State Prison in 2005 where he encountered Father Gordon. He had been abandoned by his mother at the age of two. When she returned 10 years later with an American husband on September 10th, 1985, this started a new life for him though it would unfortunately turn out to be a life of abuse and much suffering. On that day, Fr. Gordon was present at his uncle’s funeral, a priest who had an important influence on his life. Little did either of them know that some 25 years later, their paths would cross.
As it turned out, Pornchai’s stepfather was cruel and abusive. He raped him and his brother multiple times, and threatened to hurt their mother if they disclosed this abuse. Eventually he ran off at the age of 14, lived on the street, fending for himself, carrying a knife for self-defense that he would use later, when pinned down to the floor after shoplifting. Because he was worried about his mother’s safety, he didn’t dare speak about his own ordeals during his trial and was condemned at the age of 18 for 45 years without parole. None of the mitigating circumstances of Porncha’s plight were known. Unfortunately, he couldn’t save his mother who was later murdered in Guam by his stepfather, it seems.

It is a strange twist of fate that he who had been sexually abused would be helped by a priest falsely condemned for that crime. Fr. Gordon gained his trust by being kind, not allowing himself to be put off by Pornchai’s anger since he saw beneath it much hurt and pain. Eventually Pornchai’s hell of anger and hatred was transformed into hope, faith and love. “I woke up one day with a future when up to then all I ever had was a past”, he said. On April 10th, 2010, he was baptized and confirmed, and the following day which was Divine Mercy Sunday, he received his first Holy Communion. He has now completed his high-school diploma and taken long-distance classes in Catholic Studies at Catholic Distance University. In another 6 or 8 years, at the end of his prison-sentence, he will be deported to Thailand though he does not remember the language anymore nor does he know anyone there. However, he wants to give his life to Christ and bring others to Him.

“I know today that my life was never what I once thought it was”, Pornchai wrote in 2012. “It was never just a series of accidents and bad events driving me ever deeper to the despair… Instead, I was led down a path to hope because I took the risk of finally trusting someone.” The seeming disasters, failures and even grave sins we commit will only destroy the tapestry of our lives if we take them as the final word. But if we give them over to God, He will turn them into its most beautiful parts, for He knows – to paraphrase the Bible – to weave straight on crooked looms.

Let us pray for Pornchai so that he can fulfill his dream of evangelizing others. And let us also pray to Our Lady Untier of Knots for those unjustly condemned to prison, that they may be freed and, in the meantime, may find their peace in Christ.
Marie Meaney

Un commentaire sur “Untying the Knots of Sin in Prison”