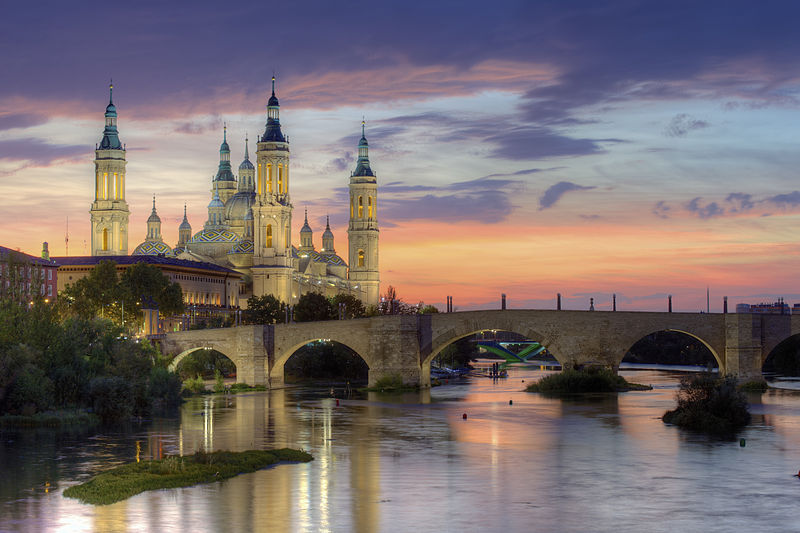 When St. James received the grace of martyrdom as the first of the apostles in the early 40’s, he had come a long way. The “son of thunder”, who like his brother John was willing to call down the fire of heaven on the unbelieving village of the Samaritans, seems to have had a fiery temperament and ambitions to boot (Lk 9:54). The demand by his mother (but endorsed by him and his brother) that they would sit at the right and left of Christ in His glory was worldly and spoke of pride. When Christ responded by offering them to drink the same cup as He would, they agreed self-confidently without realizing what this entailed. And frustratingly, Christ did not make them any promises about their future glory, since this was up to His Father to decide (Matt 20:20-23).
But together with Peter and John, James was then chosen to witness the resurrection of Jairus’ daughter, as well as Christ’s transfiguration and His agony in the garden of Gethsemane. The first two episodes would give them something to cling to during the darkness of Christ’s Passion in which He seemed to lose all His royal and divine appearance, looking more like a worm than a man (Ps 22:6; Is 52:14). But they would come out of this trial greatly purified, transformed by divine hope through Christ’s resurrection and buoyed up by the Holy Spirit to face the dangers of persecution. And the Virgin Mary’s incredible sweetness and gentleness would also help transform their hearts.

The blessed Mother and St. James
According to the mystic Maria of Agreda, the blessed Mother loved St. James “with special tenderness”. Because he was “of a generous and magnanimous heart”, as Agreda writes, he particularly needed Mary’s protection, for he would put himself in dangerous situations. She compares him to a lightening flash during his missionary journeys, during which he brought about many conversions. Thus, he was inspired to go to Spain where he found himself in grave danger. There, according to Agreda, the blessed Mother appeared to him twice though only one episode is widely known.
The first time, he and his twelve disciples had been captured by some Jews in Granada. They fettered them outside of the city, even chaining their feet for fear of their “magical powers”, and were preparing to decapitate them. St. James was praying to God and Mary, invoking her name often. She then came to him, sitting on a cloud and surrounded by a cohort of angels who brought her from Jerusalem. The fetters fell off him and his disciples while those who were ready to execute them fell unconscious.
The second time the Virgin Mother appeared to St. James in Spain was in Saragossa on January 2nd, 40 A.D. In this better-known story that has been reported not only by Maria of Agreda, but also by other, earlier sources, the blessed Mother came to see St. James as he was camping with his disciples outside Saragossa’s walls on the banks of the river Ebro. The angels brought along a pillar and a statue of the Virgin, fashioned by them. God wanted a church built in her honor, she told him, and many graces would be bestowed on those coming to pray there. James was told to return to Jerusalem where he would be martyred. The Church of Our Lady of the Pillar exists still today. God promised through the blessed Mother that it would remain until the end of the world, though Maria of Agreda qualified this by pointing out that this depended on our faithfulness.

St James Martyrdom and his Return to Spain
After building the Church, St James returned to Palestine where Herod had him decapitated on March 25th in the early 40ies. But before that, his accuser was so touched by St. James’s faith, that he converted and was martyred together with him.
However, St James’ influence didn’t stop there. For his body was brought back to Spain by his disciples and buried there, to be found again 800 years later under the rule of Alfonso II (799-842). The hermit Pelagio received a vision about the tomb of St. James and on July 25th, 812, its place was revealed by a bright light shining on it. It has been known since then as Compostela (supposedly coming from Campus Stellae, i.e. “Field of Stars”) and became one of the major pilgrimage sites in the world.
A few decades later St. James is supposed to have appeared during a battle between the Muslims and the Christians led by Ramiro I of Asturias, and helped the Christians to slay 5,000 enemies. From that moment on he was called “matamoros”, i.e. Moorslayer, and was often depicted on his horse hewing down Moors. Though this battle counts as legendary, our politically correct mentality cringes nonetheless at the thought of God getting involved in battles and sending a saint to help kill so many people. But then again, God and the blessed Virgin assisted the Christians in winning the battle of Lepanto despite terrible odds (1571), and the French in driving out the English under the guidance of Joan of Arc (15th century), and the Polish in winning against the Protestant Swedes (1655) when the blessed Mother appeared to the enemy, thus ending the siege of Czestochowa and helping to save Poland. In all three cases, by the way, God was helping a country or a civilization to defend itself.
Meekness is not opposed to strength and courage, though it is to prideful anger. St. James overcame the latter in order to channel his temper into service of God and the defense of the oppressed. He was a fiery missionary who evangelized Spain very rapidly and then went back to Jerusalem, led like the sheep to its slaughter in order to be martyred. But when Spain was in danger 800 years later, he did not hesitate to go into battle. Soldierly courage is not opposed to Christianity. St. Michael, though an archangel, is after all the general of the heavenly hosts. If we try to turn God into a toothless dotard, then we fail to see that he is not, as C.S. Lewis kept repeating in his Narnia-chronicles, a tame lion: he is gentle to those who are good, childlike or repentant, but terrifying to those with a bad conscience.

St. James, please help us together with the blessed Mother whom you love so much, to untie the knots of unrest, revolution and wars plaguing our modern world. Teach us how to combine courage with meekness and to combat evil humbly like the blessed Mother whose humility strikes fear into the devil and his minions.